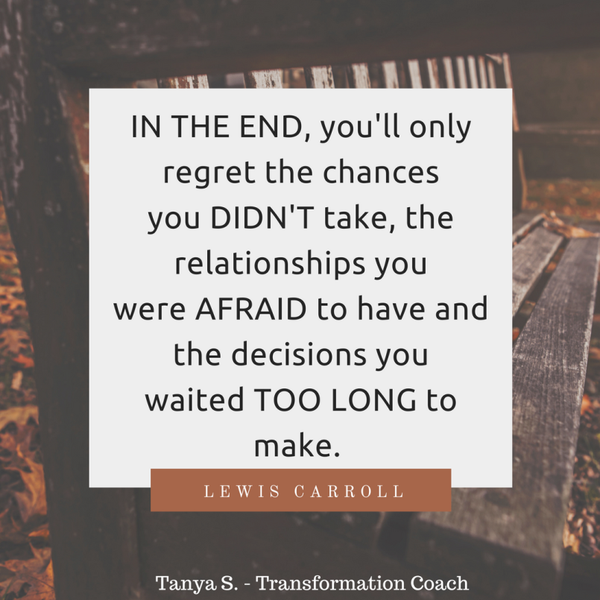 I teach from my daily life. This was a reflective weekend. My neighbor’s heart stopped 6 times in ICU and they brought him back. Yet, this past Sunday, two other people I know (unrelated) passed away.  They were good people that had many struggles before they died. I am blessed because I have no regrets.

So few people could say they have no regrets.

Mostly, it’s that sudden horrible sinking feeling accompanied by “but I was going to…”, “I could have…”, “I meant to… “.

I’m going to do a public service here and tell you the truth – YOU are not freaking immortal. You are going to die and YOU do NOT know when.  You need to get active NOW to stop creating more regrets…

I’m here today to help you get on with that (…this may sting a bit, truth often does).

“We must all suffer from one of two pains: the pain of discipline or the pain of regret. The difference is discipline weighs ounces while regret weighs tons.” Every time you see a study where somebody asks people on their deathbed what they want others to know – they always share their regrets.  Their regrets are always the things that they did NOT do.

Nobody ever says, I regret that move to LA or trying to get the job in theater or telling them I loved them. They have a long list of things that they did NOT do and that is what is bothering them an hour before they die.

I’m wired up differently from most of you because my soul agreed with God for me to be a Massive Transformation Coach. Meaning, I swing into massive action to cause massive transformation. So just like Nike, I just do it.

While I’m thinking about this right now – I don’t have any regrets. That is a really cool feeling. It is very freeing.

So let me go ahead and give you Tanya’s definition of regret.

REGRET: The form of guilt you feel after failing to assign the proper urgency to an action truth requires OR

When Your Heart says YES and your Head says NO/MAYBE LATER and you follow your HEAD.

I see this all the time! Seriously. It makes me shake my head, because regret is PREVENTABLE.

A Setup for Regret

So follow this story – a woman contacts me with a normal list of issues – marriage ups and downs, not enough time with her kids, hates her job, doesn’t trust herself, feels like a fraud, moments of bitchy and controlling, not able to make the kind of money she wants to free her family… (don’t judge! this is a VERY normal list for my clients by the way).

I get her on the phone and in less than an hour, without her telling me her backstory, I can see the patterns of her life and where she sabotages herself. And better yet – I can see how to fix it ALL.

Here I point you to my coaching that when making a decision, there is NO Hell Maybe! Meaning everything in your life is either a Hell Yes or Hell No.

Even though she thinks she is saying “yes”, I consider her to be saying Hell No. Yes, means you act in some way, now. Everything else is Hell No.

Here’s what’s funny (not ha ha funny, more like WTF funny), people talking to me realize I really CAN change their life and make things start to work. But many of them CAN’T get themselves to the Hell Yes (Hell Yes – is saying YES and acting on it).

They can SAY the yes, but that is a lie to themselves. Did you feel a twinge on that word “lie”? That is the truth of what you are doing when you are saying YES but not taking any action on your YES.

When you say YES and don’t act in accord with that yes, you are lying to yourself.  It is like a man who SAYS he loves you but then treats you like crap. Lying right? It makes you feel better to say YES because it’s who you WANT to be, but your ACTIONS ARE WHO YOU REALLY ARE RIGHT NOW.

Most deep regrets come from a YES that we felt we should say and then we didn’t show up with the YES actions.

YES, I’ll visit you older person in frail health and then you don’t and when they die…Regret.

The action is always just around the corner. “I’m ABOUT TO hire my coach.” “I’m GOING TO save my marriage.” “I’m WORKING ON getting my sales numbers up.” “I’m ALMOST READY to forgive my Ex.”

Where are you doing this?

You all know a friend that every time you meet her out for lunch she’s “about to” start her diet the very next day. How many years has she been “about to” lose that same freaking 10 (now 20) pounds?

It is SO important that you understand that this is the perfect recipe for regret.  Generally, when you put off the action part, it means you’ll never really start.

The Necessity of Urgent Action

When the crisis hits: the divorce threat, the death, the sick child, the job loss, the pay cut – your ego (which normally hates me) will immediately remind you of the moment in time BEFORE the crisis where we could’ve acted to prevent it.

Ego does that to fill you with regret.

Note for those in Sales: The hardest thing in the world to sell is prevention. That is why you are more likely to come to me when your ass is already on fire at some level. (If it’s not currently on fire, looking behind them they notice somebody carrying an arm load of wood and searching for matches.)

These people are motivated to go and go now. They are Hell YES.  Those of you who think your life is OK, Good, Good Enough – are actually the MOST difficult people to help. You are under motivated.

You don’t have any sense of urgency. That inability to correctly view your current issues as urgent will lead to you having massive and profound regrets.

When the writing is on the wall, be honest, how often do you say, since THAT isn’t important “right now”, it can wait – and then you NEVER GET BACK TO IT?

Regret is always about failing to assign the proper urgency to a truth. It is where you HEART said HELL YES and you mind said NO.

We are wired, for better or for worse, to deal first with urgent situations. We have to use personal development & coaches to train ourselves to act on situations BEFORE they become urgent.

If you personally use the word “overwhelm” more than once a month – it tells you that you are very weak in that skill. It means that you let everything get into crisis state BEFORE you deal with it and then everything is too much to deal with. Sound familiar? That generates Regret.

I can look at someone’s life and predict the demise of their marriage in the near future. I can tell them that they have a window to save it. And you know what? If it’s NOT urgent enough, they don’t act.

Is this you? Are you running around letting yourself pretend that the truth and problems you see DON’T require immediate and massive action, meriting changes from you right the hell now?

You. Will. Regret. This. (Never met a single smoker with cancer feeling proud they DIDN’T quit earlier.)

Don’t make death have to come to your door to make you assess how you’re living and the choices you are NOT making.

And 16 seconds after regret arrives, guilt unpacks it’s U-Haul and moves into your guest room.

If even one of you reading this today decides to stop and prioritize something that’s an issue NOW before it becomes a crisis, so that you don’t have to try to ‘live with the regret’ of your refusal to act (and yes it is a refusal…) – I have done my job today.

If I ticked you off or poked you, I did it out of love to wake you up. I want a better life for you right now. (Oh and call the person who first came to mind as you read this. Do that NOW. I called my Dad.)

While editing I recalled a regret I had before, that I forgave myself for. I had a friend in law school who was a teammate with me when we won The First Amendment National Moot Court Championship. After graduation, I let our friendship drop to “Christmas card” level. So I didn’t know her marriage was in trouble.

I learned of her death on the news while in a restaurant. My last regret was noticing she didn’t use a married return address label on the Christmas card 5 months before her death. Intuition spotted it and I thought, I should check on her & her marriage and I didn’t. I’d later wish, that I’d even just sent a card.

My resource for you this week is Blue Mountain Arts Online E-Cards – I love them & I’ve been a member for years. I always buy their paper cards at airports when I see them (they are pricey but they make really nice cards with thick, wavy paper).

Use their 7 day free trial – you can send unlimited cards here.

Send the cards you need to and send them NOW!  Just say Hi or I miss you or I’m sorry. Take a look at something in your life that you know you need to attend to that you’ve decided is not “urgent”. If it would be easier to act NOW to prevent, manage, control or generate the outcome you WANT – then decide to take ONE single action today. Take one step. It might be as simple as two minutes of Google searching. Me? I just scheduled my overdue mammogram. (It took 7 whole minutes to get a spot 2 days out. I made it URGENT.) The energy of regret acts just like the energy of guilt.  It paralyzes you from taking steps to correct what is wrong and builds a pattern of NEVER acting in time.  The concept of atonement is a good one here. Atone for your past regrets by taking CURRENT massive action to prevent forming new regrets. Start with your smallest regrets and work upward. Bonus tidbit: You cannot see future opportunities while in a state of regret because regret is ALWAYS backward looking. Thanks!  I caught the tail end of your call today.   For me the message was “service”.

I’m finally catching up to your initial advice.  I filed [for divorce] again, working with a parenting coach, had a prelim hearing, moving out soon, moving back once [my Wife] finds a place for her and the Children closer to school, and starting a new job (Senior IT Security Consultant).

Feeling good and the feeling is growing despite not having all the answers and knowing all the details first.  This is strange for me.  Thanks for being you and continuing to do what you do.  You are an inspiration.

[Focus Mag] Regrets? How & WHY to Turn Those Around

I Show those READY for Better & WILLING to Change
How to Transform their Lives from Messes to Miracles, Overflowing in Loving Relationships, Vibrant Health, Visible Wealth & Perfect Self- Expression.
Click Here to Visit FearlessFocusCoaching
Powered by AWeber Email Marketing