Titanic Life Lessons: How to Hit Icebergs (and Survive)

Just about everybody knows that the part of the iceberg you see usually represents only about one third of its mass and that the majority of the iceberg is under the surface – not visible to the naked eye.We even have a popular saying – “well that’s just the tip of the iceberg… “Icebergs represent your problems. The top of the iceberg that you can see is  the issue or what other people are doing. The bottom of the iceberg that you can’t see – is you!In the old days when people spotted icebergs they got in trouble because they immediately attempted a course correction based upon just what they could “see”. They did not take into account the problem below the surface – which was always the bigger problem.Next time you spot a problem – from a person or event, use this Iceberg Analysis.
Whatever it is that you can see is the tiniest part. The part that you really need to be concerned about is the part that belongs to you that pushed the problem to visibility at the surface in the first place. It’s YOU that is supporting the entire problem. Change you, change it.

The counter-intuitive advice?  If you see an iceberg in your life – Hold Your Course. Deal with it (your part) and don’t veer off.

Did you know that just moments before they Titanic hit that iceberg the spotters saw it and called it down to the bridge? The man at the helm ordered the fastest turn the ship could do – and they missed the visible part but hit the part below the surface sideways which tore a long hole in the side of the ship that breached FIVE watertight compartments. If they had only punctured FOUR they could’ve stayed afloat. Some people theorize if they had hit the iceberg head on without turning, something that the ship’s was designed to withstand, they would’ve stayed afloat.

Like the Titanic, you are designed to face things head on and running usually causes more damage than you can quickly repair.
Here are the 10 Life Lessons of the Titanic from my research:
1. The Biggest problems are always below the surface. 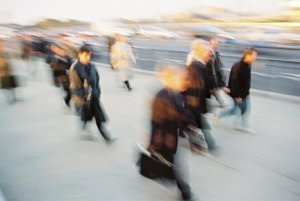 2. Being too busy is deadly.
Little known fact, the ships wireless set had broken that day and after spending all day repairing it, the wireless operator Jack Philips was desperately behind sending his routine messages. A ship 6 miles from them wired it was at full stop become of icebergs in the area and WANTED TO SEND THE COORDINATES OF THE ICEBERGS. His reply? “SHUT UP! SHUT UP! You are jamming my signal. I’m busy. I am working [messages to] Cape Race.”
3. Beware Looks over function.
Life boats were not considered very critical BEFORE the Titanic. The number of life boats required was measured by the ships weight, NOT the number of passengers. The ship carried 2,223 passengers on it’s maiden voyage. Yet, they only had life boat capacity for 1,178. They originally had MORE lifeboats but at the last minute someone decided it made the beautiful boat look “cluttered” so they removed them! Only 706 people survived, with 12 being rescued from the water. Who made it? 20% men, 76% of the women and 50% of the children.
4. Practice what’s important.
Ever been annoyed by those cruise ship life boat drills? The Titanic staff hadn’t practiced so it was well over an hour after they knew the ship was lost before they launched the first boat and they did it so inefficiently that there was room for another 500 people in the boats that went empty.
5. Just doing your job/part can make you a hero.
The band leader, Wallace Hartley, is a hero. He and the band kept playing to keep the passengers calm and stayed at their posts until that boat went down, even though he had just gotten engaged and was sailing to his fiancé.
6. Disasters bring positive change in their wake.
This maritime disaster caused change: lifeboat regulations, ship designs, standardizing warning procedures, build designs and they formed an ice patrol for the area which prevented any future boats from sinking.
7. Help often comes from unlikely sources.
The boat that was the closest, 6 miles away, through a crazy series of events had shut off their wireless and never got the message the Titanic was sinking even though they were close enough to help. Their Captain was vilified for ignoring 8 signal flares and common sense. Help came from a boat that traveled from 58 nautical miles (107 km) away, pushing itself 50% faster than it’s top speed to help.
8. Evacuate women and children first.

Get your vulnerabilities out of the way and leave your strengths to make an undistracted stand. I have no gender equality issue with getting women and children off a sinking boat first. If I didn’t have a child to protect, I don’t think I would go immediately. I would join the solution for as long as I could, if it would not distress/distract my mate.

9. Once you know the cause is lost, abandon ship.

People didn’t fill up early boats out of laziness and overconfidence. They were on the UNSINKABLE ship. Follow your instincts. If your intuition is reading something as a disaster before it looks like one, it’s coming.

They signaled from the wireless until the radio room went dead. They shot off 8 flares (which the closest ship couldn’t figure out if that the white color was a distress call but did nothing to ask). The Titanic went under in 2 hours and 40 minutes. When you need help, ask but don’t wait on it, it might come too late. Adapt. Improvise. Overcome. Get your Help Below…